The first mention of the François family takes us back to 18 July 1354, when, by a charter issued in the Bourget chapel, the Count of Savoy, Amadeus VI, in return for a remittance from Florence of 2,000 gold florins, entrusted to his treasurer, Nicod François, the castle, village, district and judicial circumscription of les Allymes. Nicod François became Count of les Allymes and settled in this area of Haute Savoie.

The name François attests to origins in this area. It is associated with the figure of Saint Francis de Sales who was born here in 1567.

The family then settled in Nancy, the capital of Lorraine, a French gubernatorial province from time immemorial. This region’s citizenry is − and has always been − greatly attached to its homelands and historical roots. 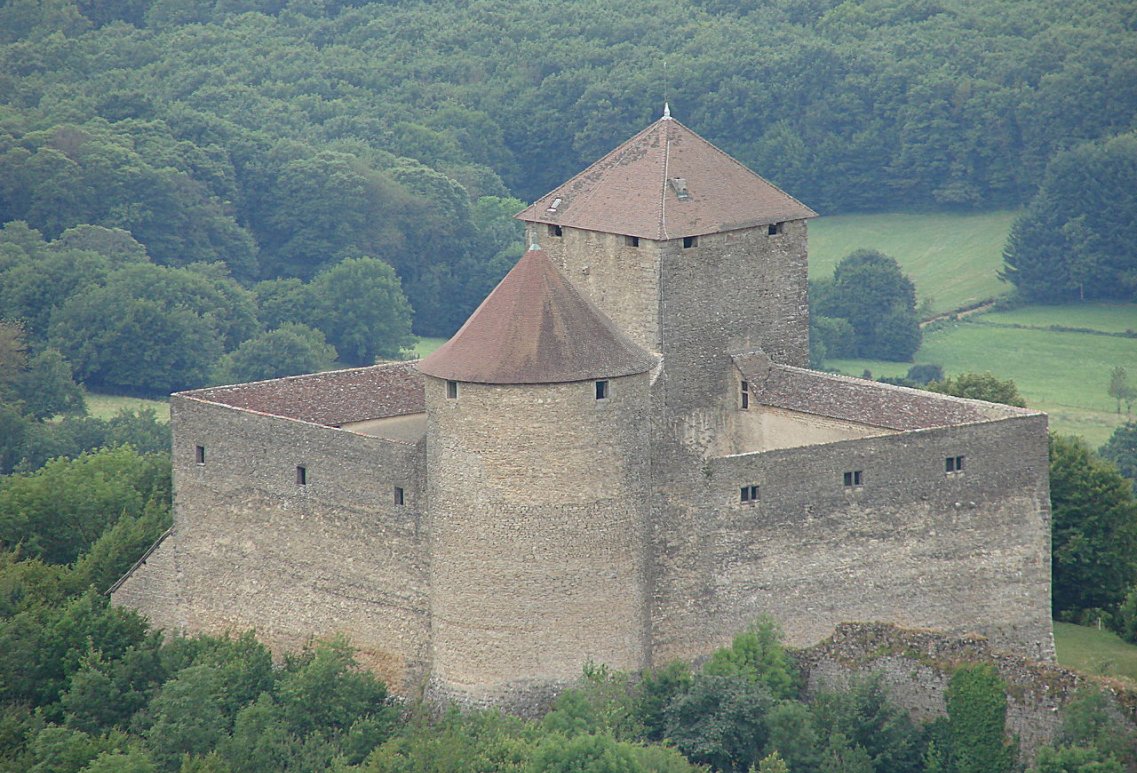 The House of François was always known for its commitment and loyalty to the Court, acknowledged in the various Royal Orders conferred upon the descendants of the first count, Nicod. This became an enduringly distinctive trait of the family.

Thus, in 1740, a branch of the House headed by Antonio François was transferred to Tuscany to serve the House of the Emperor. We may note in particular that the eldest son, Jean, was appointed by Francis III of Lorraine the Ispettore nell’Ufficio della Gabella dei Contratti (inspector of the office of taxes and contracts) of the Grand Duchy of Tuscany. 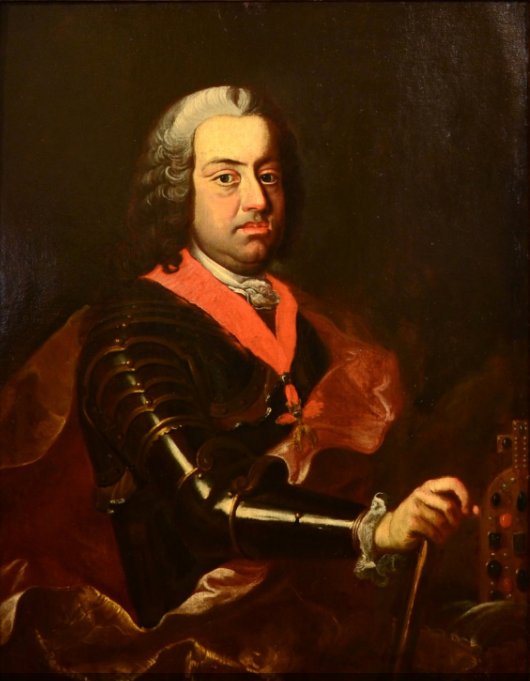 On 15 July 1749, Antonio François was raised to the rank of marquis by the Holy Roman Emperor, Francesco I.

Antonio’s rise was owing to a devoted, unswerving loyalty toward the House of the Emperor. His career saw him in the roles of Gentleman of the Bedchamber and Palace and intendant of the Court’s pharmacy. He joined the imperial army for its campaigns in Hungary. The Emperor also noted Antonio’s qualities as a father, since his two sons were, ethically and morally, equally irreprehensible.

The noble title and coat of arms are to be found today in the Florentine register of nobles, the Libro d’Oro dei Nobili di Firenze. 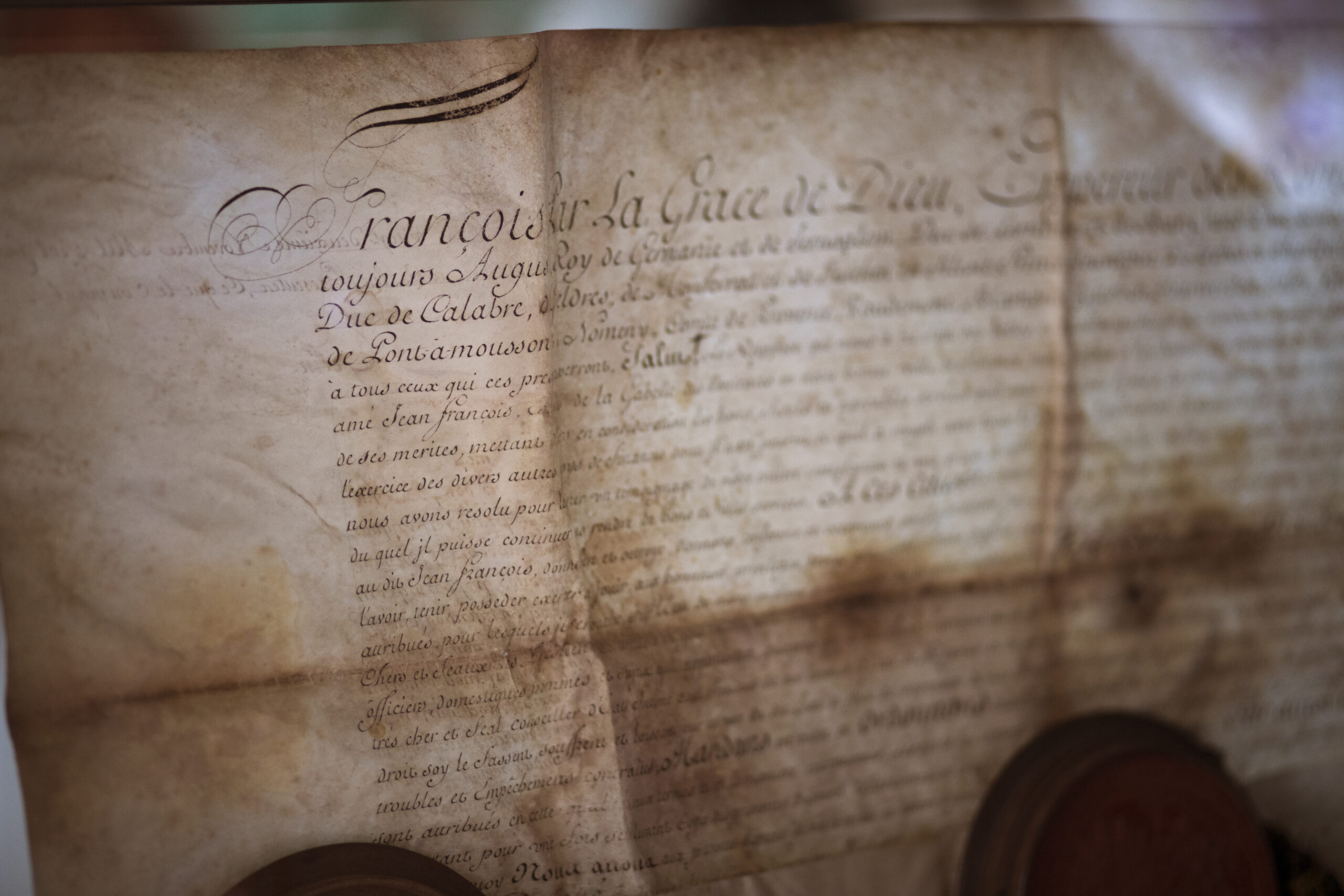 1844 – Alessandro, an explorer of Etruria

In 1796, Alessandro François was born in Florence. He was to become one of the most illustrious members of this House. He became a great archaeologist, responsible for many priceless finds.
Alessandro’s key discoveries were in the Chiusi area. These include the major find of 1844 at Fonte Rotella − thanks to which the family’s name is associated with one of the most stunning and important archaeological treasures ever discovered.

This famed vessel, now bearing his name, was found in a tomb, and may be dated back to 550-560 BC. The vessel is ascribed to the Athenian potter, Ergotimos and the painter, Kleitas. This is a major work of Greek ceramic painting, and furthermore the largest ever unearthed.

It is a large column-krater of a height of 66 centimetres with a circumference of max. 1.81 m.
Its rarity also consists in its beauty and pleasing form and in the subject matter, namely the figures of Achilles and Theseus. 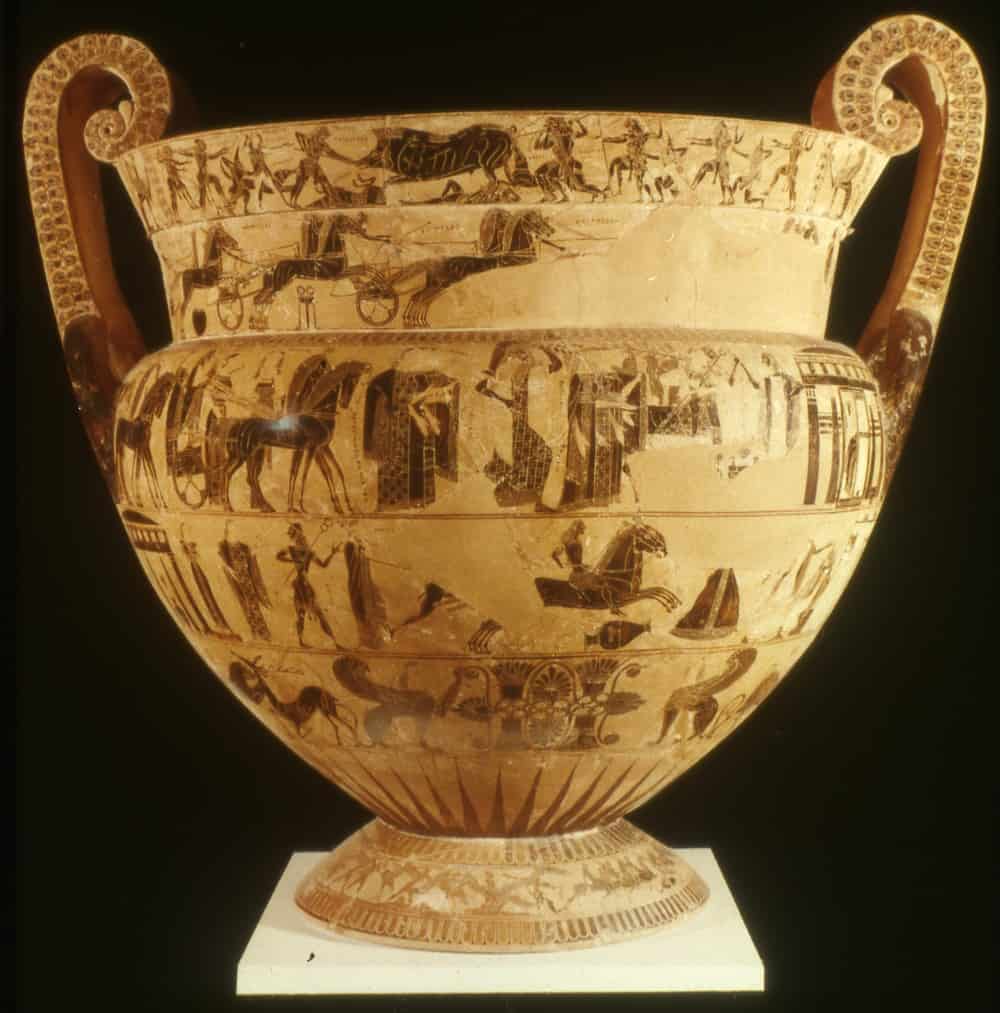 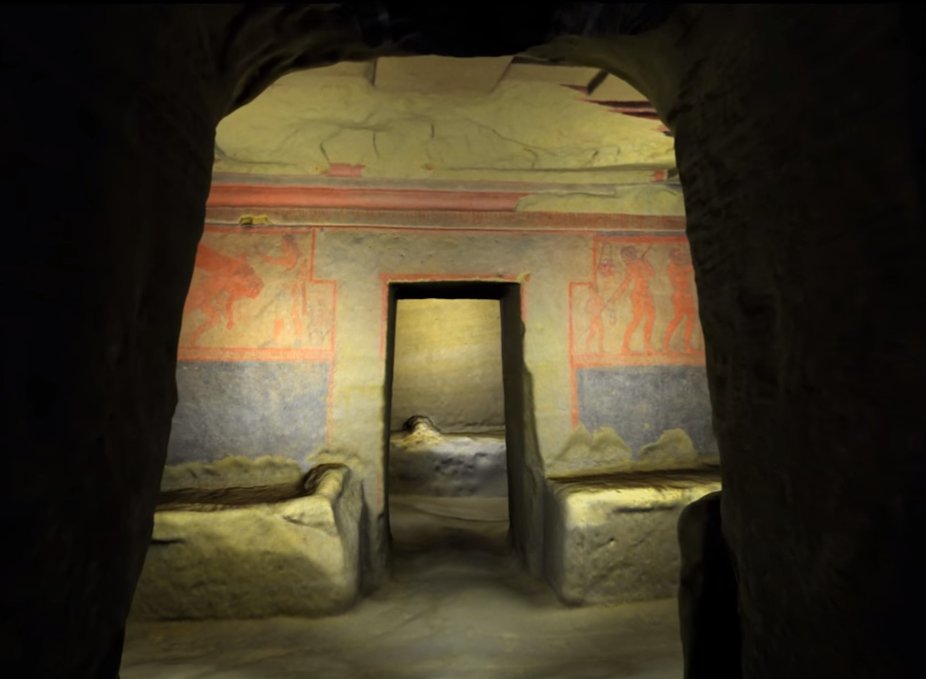 Again in Chiusi, in 1846, Alessandro discovered the Tomb of the Monkey − an impressive example of Etruscan architecture and mural artwork.

At Vulci in 1857, he unearthed the Etruscan tomb that bears his name today. It is a highly valued work known worldwide for its extremely refined mural artwork, with scenes of the sacrifice of Trojan prisoners and combat between Etruscans and Romans.

A road has been named after this eminent archaeologist, leading to the castle and nearby hamlets. 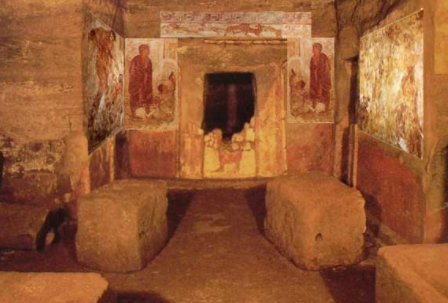 On 29 November 1897, Carlo François founded the family business when he acquired the agricultural land, woods and farmhouses of the castle, upon confirmation of the contract (then of a value of 180,000 liras).

The castle had changed hands before, from the Canigiani family to the House of Pitti and then the Barzellottis, before the François family. 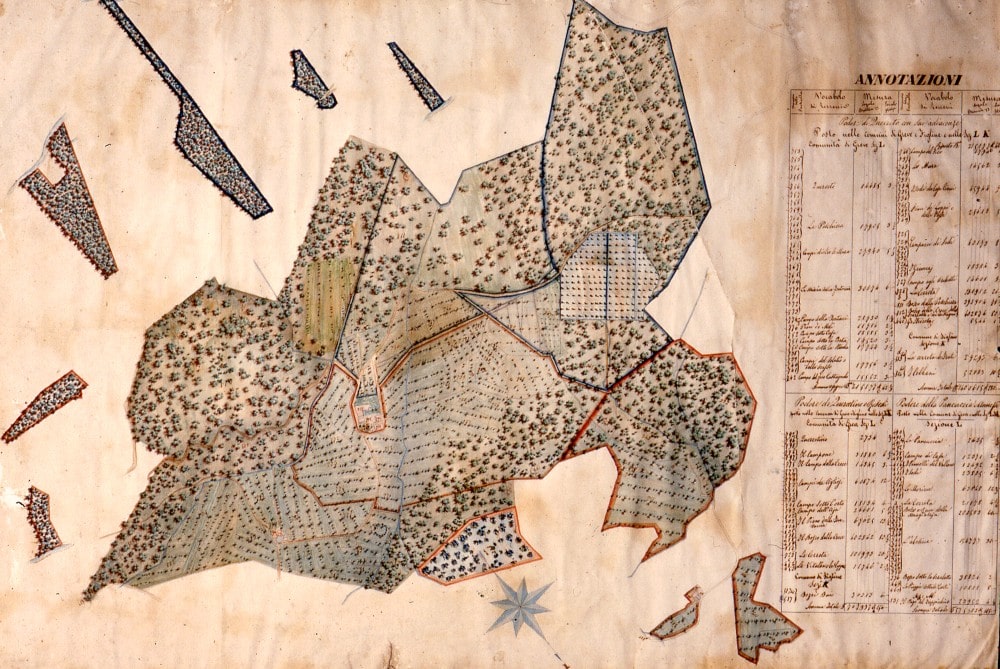 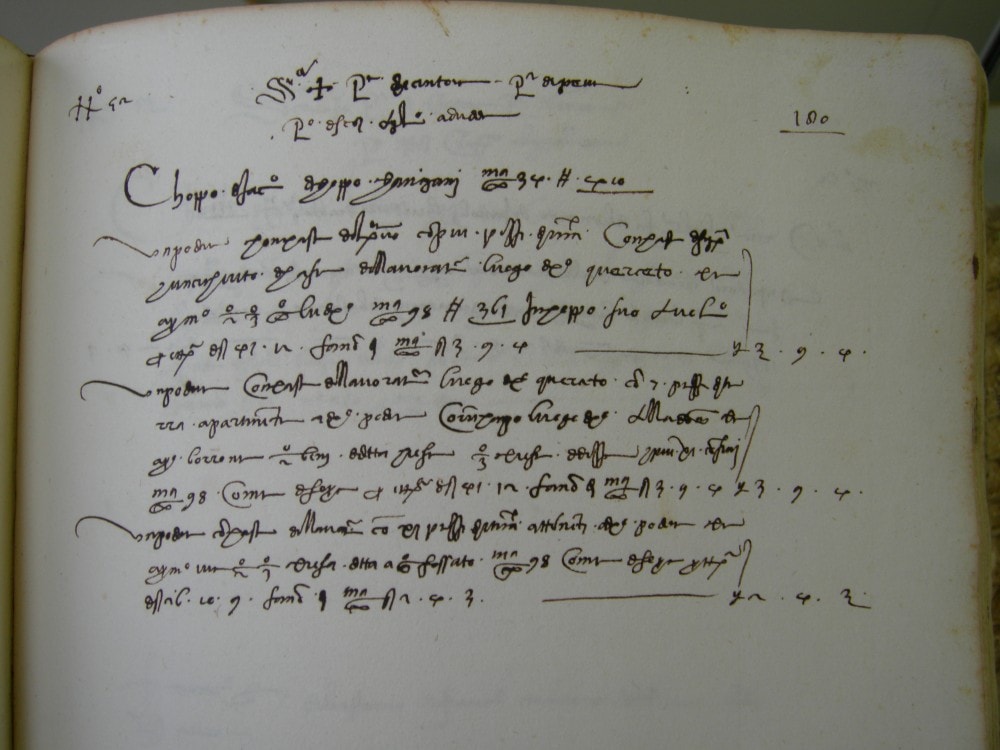 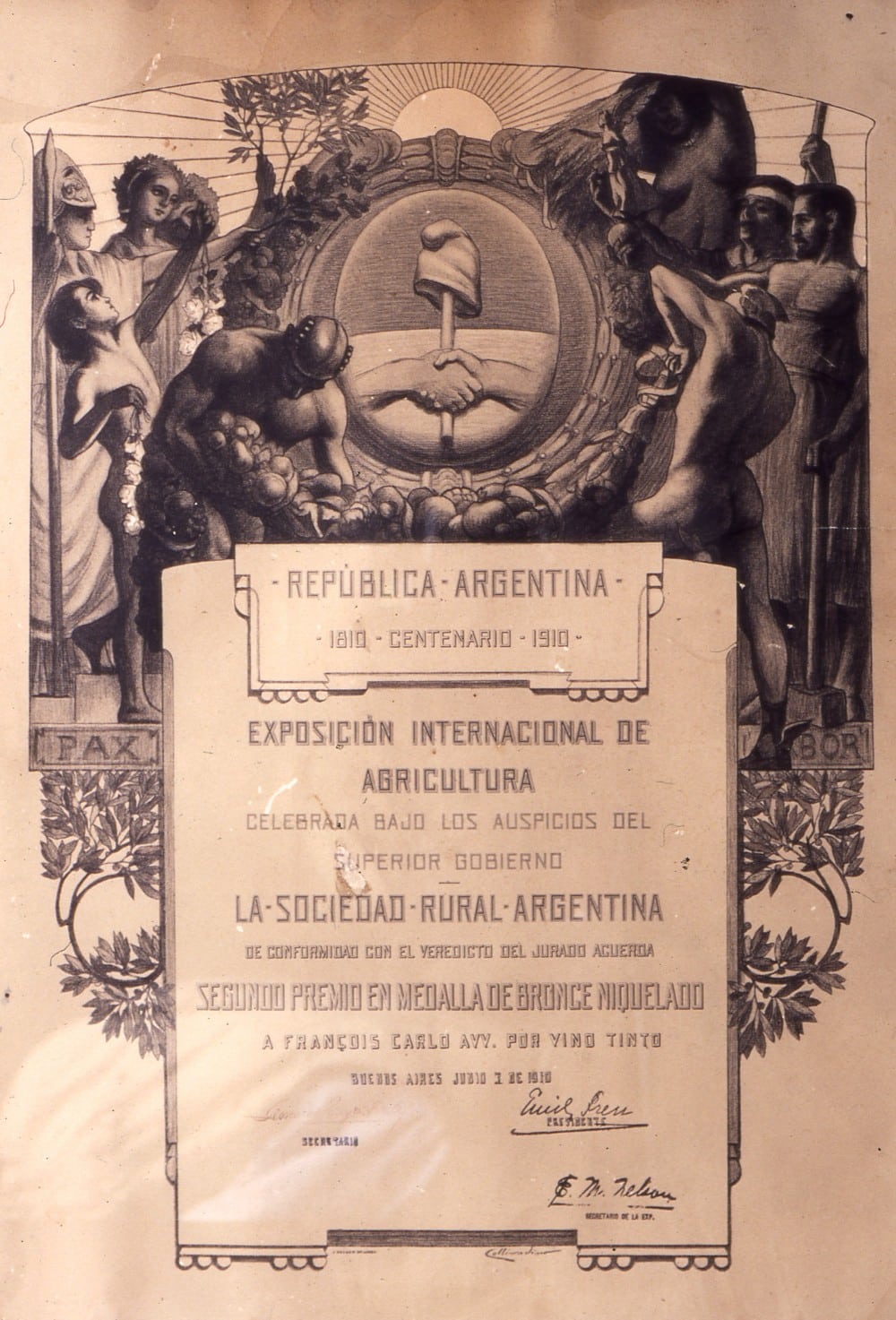 Upon receiving Castello di Querceto, Carlo personally laid down the foundations of his winegrowing and winemaking concern. He understood that much of the estate’s production had to be wine. Rather ahead of his time, he chose specific vines for lots selected with great care and ability.

Accordingly, the awards flowed in, starting in 1910 and 1911 (a gold medal and the second prize at the Turin and Buenos Aires exhibitions, respectively).

Carlo François was notable for his ability to modernize. He was one of the first in Tuscany to buy a (Ford) tractor for Castello di Querceto.

On 14 May 1924, the legal representatives of 33 winemaking concerns (among which Castello di Querceto) appeared before notary Baldassarre Pianigiani and undersigned the deed founding the “Consorzio per la difesa del vino tipico del Chianti e della sua marca d’origine” (consortium to safeguard the traditional wine of Chianti an its mark of origin).

The body is now known as the Consorzio Vino Chianti Classico.
From its inception, the Consorzio has sought to safeguard, supervise, oversee and turn the wine’s prospects as a name (Chianti Classico) to best account. The consortium’s tradename and imprints have changed over the years but the old trademark has remained the same (a black cock).

Today, the Consorzio represents about 96% of DOCG-registered winemaking concerns. It is a key point of reference for national and EU wine sector bodies. Organisationally speaking, the association runs dedicated offices to undertake its institutional tasks as to provision of safeguards and services; hence the legal office and its business functions (marketing and communication).

The François family was in attendance when the deed founding the consortium was drawn up, with Mrs Elvira Colombini and Mrs Marianna Codacci − Carlo François’ mother and aunt − the only women present, on his occasion of such importance for history of Chianti Classico.
The François family is one of the few families that has remained uninterruptedly in possession of its winemaking business for more than 100 years. 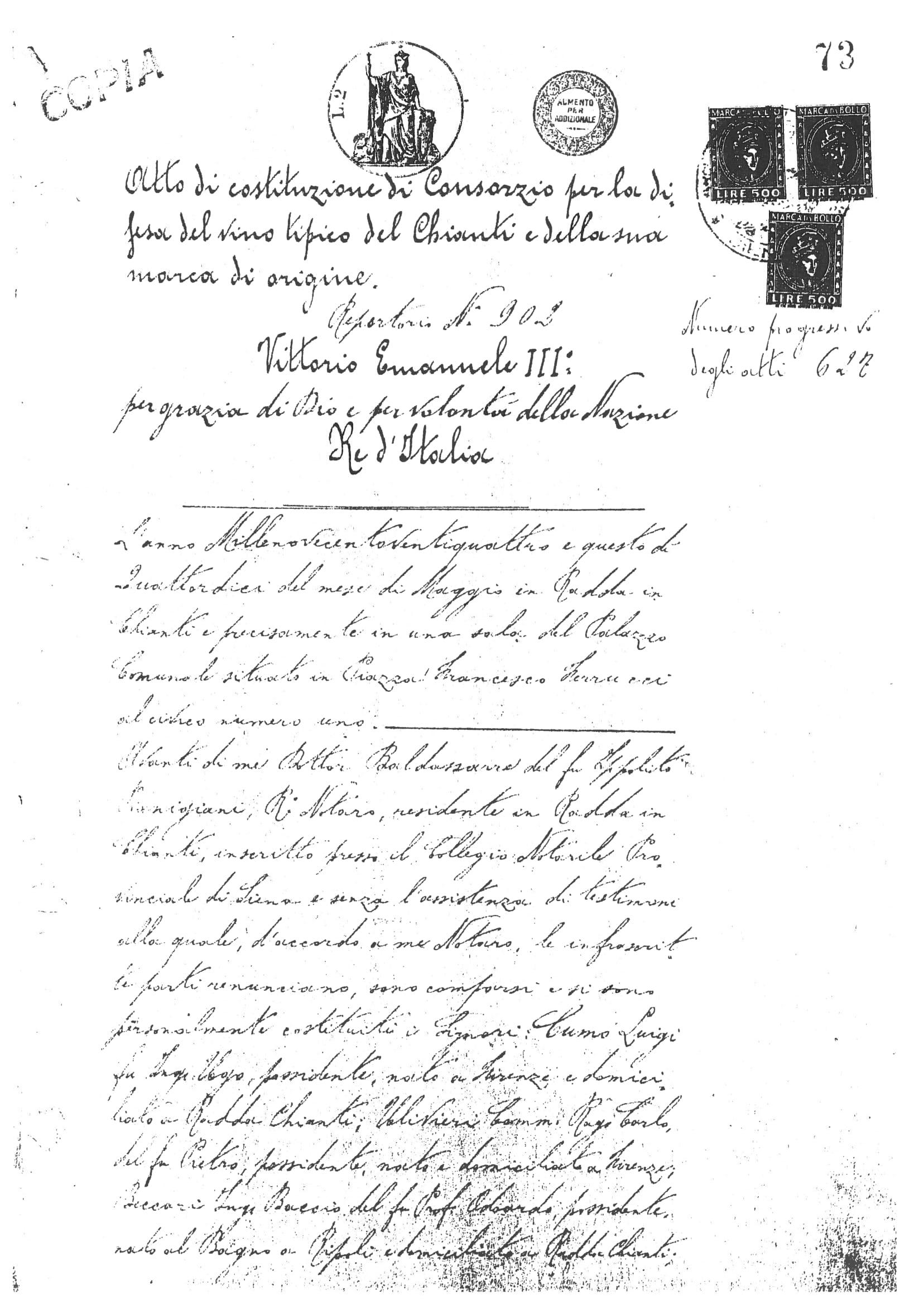 At the end of the 1970s, Alessandro François and his wife Maria Antonietta Corsi decided to take in hand the company, in a manner in keeping with the traditional qualities of will and resourcefulness of this family. Theirs was a process of radical renovation that saw them as the architects of the company’s current high repute in more than 50 countries around the world.

The first phase of this renovation work was directed above all to the vineyards, through wise identification of the best soils for innovative crops, alongside the traditional Chianti produce.
From the start, diversification focussed on the production of the estate’s cru wines that bear the name of the vineyard of origin.

Alessandro’s idea was to produce wines of great character and distinctive personality, a task he felt was possible given the varying microclimates and compositions of the soil, from area to area, combined with a policy of producing wines limited to individual areas under the vines.

The end result attests to the tenacity, industriousness, ingenuity and respect for tradition that has been unchanging here from one generation to the next, embodied today in the key roles of the couple’s son and daughter − Simone and Lia, and their spouses (thus bolstering yet again the ties between the family and its estate). 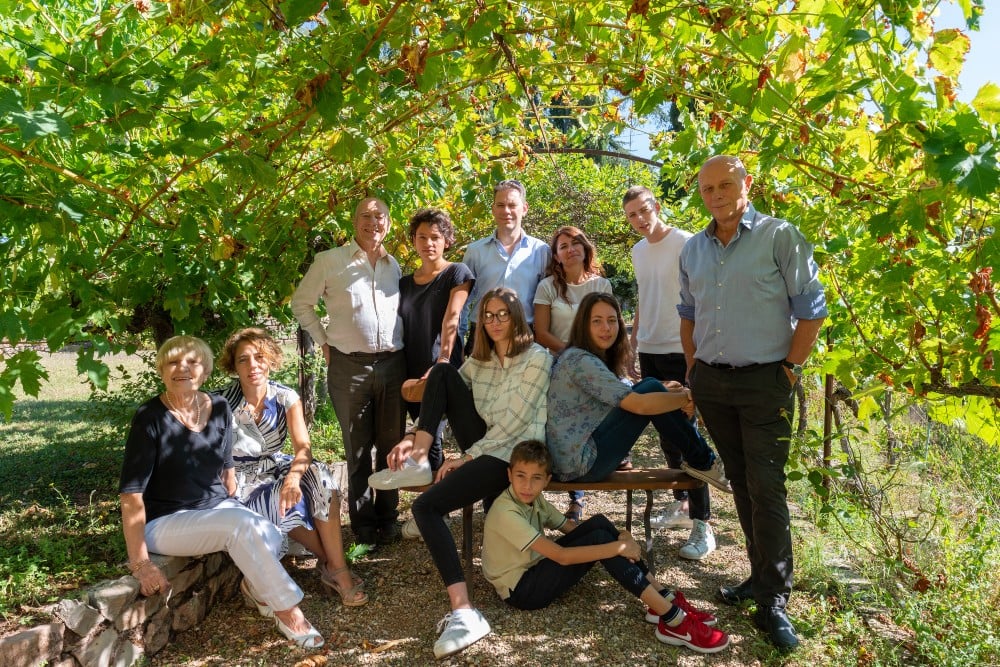